Whew, what a whirlwind of game-related adventures! It’s hard to believe that all of it happened in only a three-day time period. PAXEast felt lovingly familiar-when Mike and Jerry talked about packing up PAX and bringing it to Boston they weren’t kidding. The same Queue Room, snaking endlessly around plaster pillars with a cold cement floor. The same series of rooms containing board gamers and console players. An Expo Hall filled with bags of swag, long lines for upcoming games and the smell of hamburgers and French fries seeping from the Refreshment stands. But whereas the Seattle PAX seems filled with veterans of the convention, expectations already in hand, the Boston scene was tearfully grateful to have such a gathering closer to them. I can’t count the number of times in the PA Q&A Panels the questioner would start with “This is my first PAX and it has been the most amazing weekend of my life”. Actual tears were shed on several occasions-all due to the idea that ‘we belong’. This is a powerful emotion-one that keeps me going back year after year. I always tell Matt that the reason I love PAX so much is because it’s the one time I feel like I am actually around ‘my people’. It’s not terribly easy to be a 31 year old woman whose main hobby is something that everyone else’s sons or husbands are doing. And talking about it can be horribly awkward with my peers who are all starting families at my age. But at PAX I can see other women in their 30s waiting in line to demo the newest shooter or walking around in costume and a nice warm feeling passes over me. It’s the feeling of belonging. During Wil Wheaton’s keynote he talked about games keeping him and his high school friends together over the years-the same people he played D&D with as a teenager are still gathering around his kitchen table playing Pandemic or Small World. As a console gamer I never found this connection-Xbox Live or PSN communities didn’t exist when I was fighting Lavos in Chrono Trigger or running from Jason in the original Friday the 13th game. This year one of my goals has become to root out some local gamer ladies who want to meet up to play some board games or some Rock Band-heck, maybe I will even find someone who loves Borderlands and Bioshock as much as I do. Then I can have the same connected feeling all year long as opposed to one weekend a year. 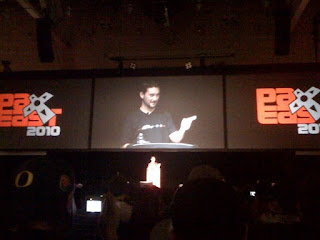 I loved the area of town the Hynes Convention Center is located. Lots of food choices and beautiful old brownstone buildings. But I did NOT love the Convention Center itself. It was reminiscent of the Bellevue location from a few years ago-too small. The Queue Room was on the first floor and the theatre on the second, so you had to do a lot of snake shaped maneuvering through crowds to get there. Sometimes we got blocked by the groups of lines and had to backtrack all the way around to the other side of the building. I am happy that they are looking for a larger location for next year, even if I don’t end up being an attendee. The Tabletop Freeplay area was enormous and always full of people. We played a LOT of board games over the weekend. 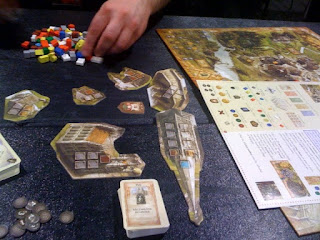 That was the easiest and most conducive way to meet other people. On Saturday night we ended up playing Ticket to Ride and Munchkin with a couple from D.C. who we liked a lot-we wished they lived in Seattle. 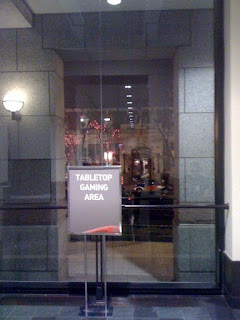 Harmonix was hosting a Rock Band Lounge with a stage-I only caught one performance but it was four guys playing The Final Countdown and I figured that was the end all of awesome. Seriously, it was the best ever. 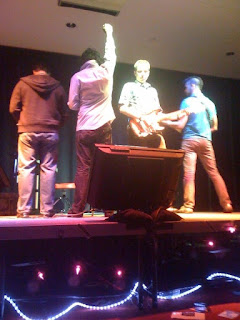 I was VERY disappointed that Microsoft didn’t have a demo chapter from Alan Wake at their booth in the Expo Hall. They were showcasing Crackdown 2 instead. I dropped into the middle of a Splinter Cell: Conviction chapter and liked it enough to want to play the full game when it releases next month. Ubisoft also had some demo chapters from the new Prince of Persia game and I cried a little due to my wall run deficiency, knowing I will only get one chapter in before I throw the controller across the room (Matt: ‘Just move the D-pad up, push A and then move the D-pad right, sweetie. No, like this. Here, watch my hand. Okay, I give up. You have a total wall-run mindblock’). I was overwhelmed by the sights and sounds of the Rockstar booth and added Red Dead Redemption to my Gamefly Q in a hypnotized daze, as though it was something I couldn’t NOT do. The combination of horses and techno music are apparently my undoing. I was nervous when a splicer found me-I know how they get when you take pictures of them. 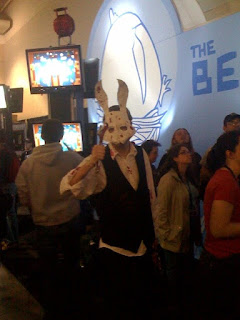 The Boston Indie scene made a huge impact in the Expo Hall. We tried and loved Slam Bolt Scrappers, a combatant kind of Tetris game. Definitely a future XBLA must. 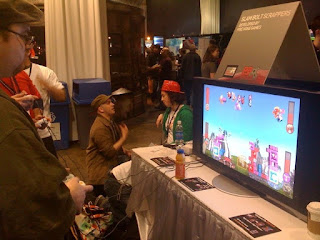 Although we didn’t attend the night concerts we spent Saturday afternoon at Café 939 in the Red Room watching Freezepop perform. A lively crowd, a great show. They even played some new music, which was all amazing. And I swear I’m not just being a total fan girl. 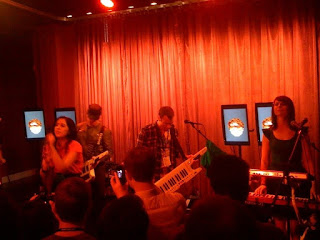 We didn’t attend a lot of panels this time around. I insist on seeing a lot of them in Seattle so we skipped all but my favorite ones-the PA Q&A’s, the keynote and the last round of the Omegathon. Once again, they felt comfortable and familiar, showing that you can take PAX to another city, but ultimately the heart and soul of the gathering doesn’t change. And I have to admit, although this was my fifth time around and I am surely one of the veterans, I still found myself misty-eyed hearing the first timers who felt so blessed to be there. I know how they feel. 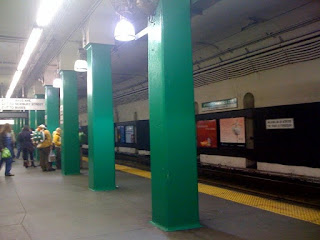 Posted by Jessica Dobervich at 4:12 PM

Email ThisBlogThis!Share to TwitterShare to FacebookShare to Pinterest
Labels: PAXEast