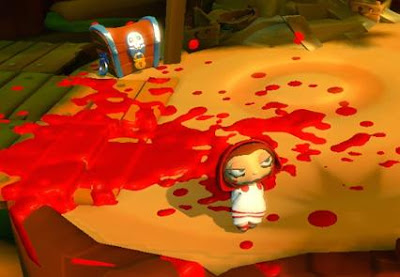 Being a fairly equal opportunity game player, I find great fun in playing the simple, E for Everyone type games- the Lego games, Thrillville, Harry Potter, etc. I even played through the Pirates of the Caribbean, which was basically just a watered-down Action Adventure game starring animated Johnny Depp. I demoed a game at PAX09 called Fairytale Fights. Although not exactly rated E, the concept for this game is precious-Little Red Riding Hood wielding an ax (or bat, or marshmallow on a stick, or rolled up newspaper) and slaughtering her way through a cartoon world of storybook pain. When I started playing the actual game, however, it soon became clear that this was going to be an un-fun gaming experience. The concept is innovative, the story is okay, but actually playing the game is a lesson in frustration. I nicknamed my Little Red Riding Hood “Greasy Feet” because it seemed no matter how I attempted to control her, she would slide off platforms, islands, or wooden rafts causing an instant kill. The fight sequences were boring and repetitive. Opening chests gave you treasure, but only if the treasure itself didn’t slide off the platform before you could reach it. I considered the first level the entire game and turned it off directly after. Interesting idea, dreadful game experience. I would not recommend.

Actually, I personally wouldn’t recommend any game that relies on platforming (aka, ‘Donkey Kong bulls**t’) as one of its primary game mechanics since I have depth perception problems. That combined with my infamous wall run dilemma make Prince of Persia pretty much out of the question. I transform into a monster even attempting it. No exaggeration, I have a witness. When I got to the last tomb in Assassin’s Creed 2 I discovered I would need to perform a combination of platforming and wall running to progress. And it had a TIME LIMIT. I weighed my options, performed a mental pep talk, attempted it twice and then burst into tears. I knew with absolute certainty that there would be NO WAY I would get through it and I was going to miss out on the rest of a great game. Matt tried to encourage me with a ‘you can do it!’ but in the end he just calmly took the controller from me, made the leaps and bounds in record time and handed it back. My hero.

Last weekend I fought my way out of Rapture once again. For a game that smears blood on walls and leaves charred corpses around nearly every corner, the ending sure was cuddly. This was pretty much what I thought would happen considering all of my musings from my last blog. I won’t let loose any real spoilers this time, but all-in-all I had a pretty damn good time. I wish it were longer-probably about 20 hours if you are crazy obsessive about checking every file cabinet and desk (and corpse!) for goodies. I tiptoed into a couple of Multiplayer matches but died horribly about six dozen times and bowed out. Since I don’t play a lot of shooters and have never played any online games that aren’t Scene It! I didn’t expect I would be a master. I imagine at some point I will head back in guns blazing, praying I last a minute or so at a time. Anything to keep the game going until something better comes along (God of War 3).

Screen shots from Fable III at X10!
Posted by Jessica Dobervich at 2:06 PM