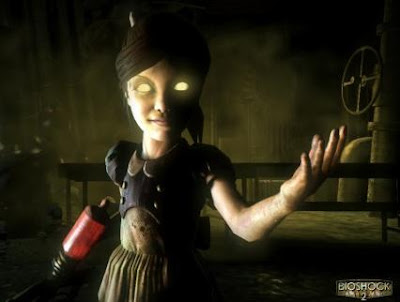 The original Bioshock is a game about survival and escape. After falling into the ocean after a plane crash, our hero’s situation gets ironically worse when he washes up in an underwater city called Rapture. Rapture is a man-made Post-War metropolis constructed in the 1950s where time stands still even when the inhabitants start mutating and turning on one another in a genetic manipulation dream turned nightmare. The most remarkable feature of Bioshock is Rapture itself. Oh, what a world. If you could imagine the mansion in The Shining underwater and full of mutated humans in fetching suits and Donna Reed housecoats you would be coming close to the seclusion and terror the first game offered players. And it truly was the feeling of helplessness and isolation within Rapture that I thought worked so well for the game. It tickled the same fancy in me that spooky horror movies do. But the element that really grabbed me were the Little Sister characters. In such a wicked world gone wrong scenario, the Little Sisters and their watchful Big Daddy’s added the spark of hope and innocence that kept the game from sliding down into the darkness. And it was your choices as the player in regards to them that gave the game an unexpectedly moral slant-would you harvest them or save them? This choice had an effect on the outcome of the game as well, so what you decided to do mattered in more ways than just giving you a warm and fuzzy feeling after each one.

The second game, released last Tuesday, uses the same ethical aspects as a driving concept behind the new storyline. You are now playing as a kind of ultimate Big Daddy in the sense that you were the original Delta Series Big Daddy, now returned to save your own Little Sister from her wicked 'mommy' who is deranged in true villain styling (‘Mommy allowed Stanley sell me to an orphanage!’). Your Little Sister, who in red and pink tinted voiceovers has turned into a Teenage Sister, helps you along the way by giving you some back story reinforcing Evil Mommy as the antagonist and pleading to be saved. There are still mutants to be eliminated and Little Sisters to be ‘saved’ (up to you!) and Rapture is still very isolated and terrifying. There are also some survivors helping you via radio, but some also think of you as a monster, poisoned by Evil Mommy telling everyone you are essentially a baby killer, and it is up to you whether to knock them off for their hateful attitudes or save them based on your mood/good nature (really, there were just misinformed, right?). I am not yet to the end of the game as I still have one chapter to go, so I am unsure if killing or saving these characters matters in the long run, but knowing what I know from the last game I imagine it will.

Summarizing games is not normally something I like to do in blogs (my college professors are whispering in the back of my mind to pick a thesis and extrapolate, dammit), but what I am trying to show here is how I see the game evolving. Instead of being a hapless victim of Rapture, you are now a piece of the Rapture puzzle and hell bent on being a Savior. The basic drive of the story turned from fear and desperation to protection and familial love. In that kind of environment I can’t understand how anyone deeply involved in the emotions of the game could turn aside from the ethics and choose a moderately evil road-your ultimate mission seems to be based on the love for your own Little Sister. To continue greedily harvesting the other little girls and kill off characters when given a choice goes against the motivation of the narrative. All of these elements were surprising to me when I traveled back to Rapture for Bioshock 2. The game play is essentially the same (I do miss my wrench, the drill is ho-hum in comparison)-the rooms still look like a promo for a World Without Humanity documentary, there are still plenty o’ mutants to kill and tons o’ things to hack. You still collect plasmids to light everyone on fire before shooting away (maybe I am the only pyromaniac, but I doubt it) and there is still loads of research to be done via photography. But the fear is gone. The ‘how did I get here and how the HELL do I get out of here’ mentality has been eliminated and Rapture is almost like home, albeit a wet and bloody corpse-filled home, but home nonetheless. The colors seem a little brighter and the NPC’s seem more obnoxious than startling and scary (oh, you again? Fire…Ka-Boom). As the story evolves it is easier to invest actual emotions and feel as though it was intended all along. I will be interested to see how they transition to Bioshock 3…

I haven’t tried the multiplayer yet, but rumor has it the story is unique and pre-present day. I will probably give it a go after I finish B2 and Dante’s Inferno, which is sadly being ignored.

Weirdest thing I miss from Bioshock: When you save/harvest the Little Sisters they used to resist you and say “No, No…” Now they just stare at you and glow before sweetly thanking you and climbing back into their hidey hole. I say it out loud for them now.
Posted by Jessica Dobervich at 3:45 PM

Email ThisBlogThis!Share to TwitterShare to FacebookShare to Pinterest
Labels: Bioshock 2